You know, I’ll give P.A. Works this, the plot at least seems interesting this time.  Compared to Sirius’s seemingly generic story idea or how Irozuku is situated in high school, this one at least has a new setting.  Unfortunately that’s about the only pass for it I’ve got… 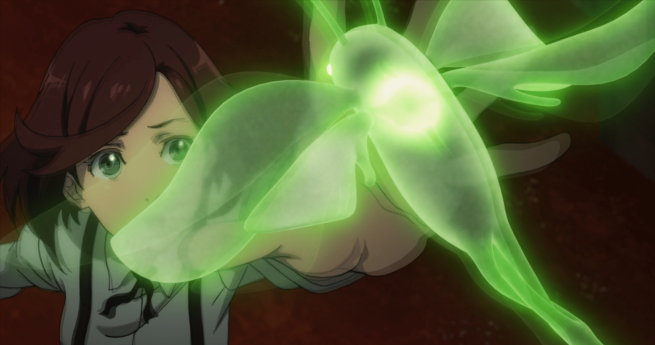 The fractured continent was brought together under the name of ‘Unified Zesskia’ nine years ago after a long period of war to unify the smaller nations thanks to the the liberal use of fairies and ‘Fairy Soldiers’, warriors created by implanting the creatures’ organs into suitable hosts.  As a victim of the war, Marlya Noel joins the neutral faction of Dorothea as the tensions of this newly unified nation arise all the while a figure from her past appears amidst the chaos.

Fairy Gone is a lot of things.  It’s a series about the dirtied history and politics of the story’s setting, the illegal activity involving three mafia families that each hold secondary power to the government, the secret of the ‘Black Fairy Tome’ and the lore of the fairies, and one girl’s journey to defy her own preconceived notions and search for her friend after the death of her village.  Just at a glance, the story of Fairy Gone is so incredibly dense with material that it actually begs the question what on earth P.A. thought was going to happen when they decided that they only had twelve episodes to pull maximum half of this off. 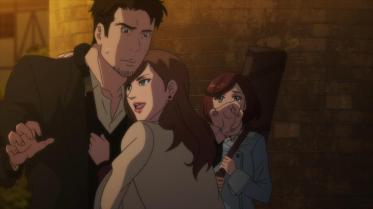 As such, pacing is the one major issue this series has.  At any point in the series, the story is running at least two concurrent story threads where in one scene, we’ll see members of Dorothea follow a lead for something before quickly switching to another perspective a few seconds alter that builds things up from behind the scenes, switching back, then conjoin the two so that the narrative fits together in the end for the story to come to a close.  However the mileage on how well this style of storytelling is executed is heavily variable due to how the story will sometimes bracket the secondary thread and elongate it into the next arc, therefore making it so that the conjoining point encompasses EVERYTHING seen before like some kind of domino effect. 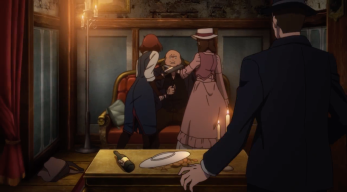 If the series had less plot threads than it did, it would’ve worked out.  But unfortunately because of P.A.’s narrative decisions, everything feels wholly incomplete: Marlya’s story is largely thrown to the side a few episodes in as she’s no longer the only focus, the interesting lore of the fairies and by extension the artificial fairies is never touched on to explain any details about them aside from what we see visually, the mafia families serve as more of a convenient plot element to throw in wrenches for the sake of adding more unnecessary characters, thus leaving the whole political element which by comparison is the only functional aspect of the story the series has.

But even that’s not really all that interesting because so many parts of the show make it abundantly clear that ‘peace’ is impossible, so none of it is really a surprise the moment the series does a one-eighty by the end by unleashing the most predictable civil war possible given the numerous amount of anti-political sentiment shared among the side cast.

Because of all of this, Fairy Gone falls into the unfortunate group of shows with “Great Idea, Bad Execution”, a trend that plagues P.A. Works to the point that I’m not even surprised anymore.  Granted there is a season two airing October 2019, but the damage to the series is already done given how messy and incoherent the series already is as a result of its less than stellar story presentation and execution.  It’s so goddamn rushed that I’ve had to do a number of double takes to make sure I’ve got everything down because there are an absurd amount of jump cuts and scene changes that it’s just sometimes jarring to watch. 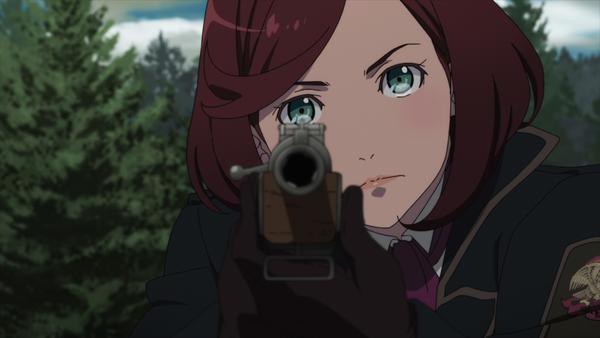 Marlya Noel is about the closest thing this series has to a protagonist.  A girl who considers herself unlucky due to the sheer amount of people that’ve died around her because of her mere presence, a lot of Marlya’s character revolves around her newfound purpose of trying to do right in Dorothea and searching for her friend, Veronica, who disappeared some time nine years ago after their village burns down.  Even with a new fairy embedded somewhere in her chest, the show doesn’t make enough of an effort to make her a protagonist worth rooting for.  So much of her time is devoted to watching her mope around, including an entire episode devoted to hammering in how little she thinks of herself by revealing a backstory where some other dude in her past died with her around.  I find it really hard to root for her and wished the series sometimes just dropped her instead of using her to introduce things while also trying to grow her character. 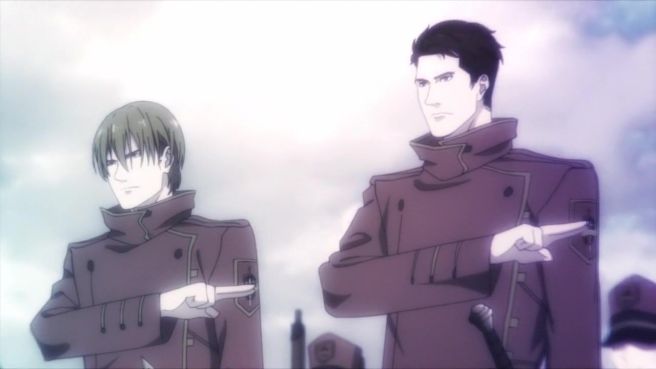 Free Underbar is another character I’ll choose to mention only because both he and Marlya are rarely seen apart.  Free’s character…isn’t at all fleshed out, and this becomes a common trend amongst a majority of the cast.  Because the show is heavily focused on story above else, the bits of character that we are shown matter little in the long run, and that’s no different with this man.  There’re a few backstory moments like the day he gets his fairy and flashbacks from the war, but Free largely doesn’t do anything aside from function as the Dorothea lapdog that he’s made out to be.

Similarly, most if not every other character follows a similar, unfortunate pattern of just being just a pawn in the grand story of this political nightmare.  And not in the good way.  Every episode to couple episodes reveals a new character in some form or another, whether or not they be members of Dorothea, government officials, ‘mysterious figures’ with motives not shown (and probably will never be shown), mafia people who get stupid names like ‘Bitter Sweet’ (seriously, what the hell), or people in flashbacks who ultimately don’t matter because exploration of character is stupid and who needs that when we’ve got a war to fight?!  It’s best to see these characters as the stage puppets they are since ultimately their impact to the story is only skin deep at being a member of the some seven odd factions that exist in this series.  Because yeah, that makes sense to reveal in a twelve episode season.

I’m not really a fan of P.A.’s work this time around.  Fairy Gone lends itself to a darker aesthetic where the colors are more drab or dark with the few colors that do exist have themselves be muted to give off a more serious and mature look to the series.  On the note of characters, one thing that the style really likes to do this time is really exemplify the lips, particularly of the female cast where they either have a noticeable gloss to them that makes them pop out more and/or has a curl in the middle to make them seem more ‘realistic’.  Personally I’m not a fan and it was weirdly distracting for me to see so much emphasis, especially on one particular character who seems like a big fan of botox.  Ultimately, the art itself is functional and still lends itself to the style, but compared to what the company is capable of, I’m just not that impressed.

The one thing I will note for art are the fairies and how despite being CGI monsters that clash with the typical style of the series, are genuinely interesting to look at.  Aside from the tiny primordials (who don’t get an explanation), each fairy from the characters that wield them physically look different and are more reminiscent of European folklore’s fae creatures that take on numerous horrendous or monstrous designs with their own unique skillsets.  I’m just personally a fan because anything that uses the original meaning of fairy with interesting, unique designs is just better in my book.

Animation is largely saved for the fight scenes which are fluid enough to warrant being noted.  Of course the CGI models for the fairies cut down on costs, but the fight choreography is good enough to warrant interest.  However it’s not really anything special, especially given how a lot of the ‘fight’ scenes involve guns and ducking behind cover, with only a few featuring the swords and fairy weapons showcased.

As for the soundtrack, “KNOCK on the CORE” by (K)NoW_NAME is an OP that I’ve grown to have interest in only for the background choir and the steady rock beat that it has to really push how the show is an action-packed adventure despite having ‘Fairy’ in the title.  It’s a nice song that’s worth a listen to, but that’s about all I can really credit it for since beyond that, I don’t really find it memorable.  Similarly, its ED sister “Ash-like Snow” by the same artist is only interesting because of how it starts with the lead up of the piano before going into a song that largely feels generic despite how it starts. 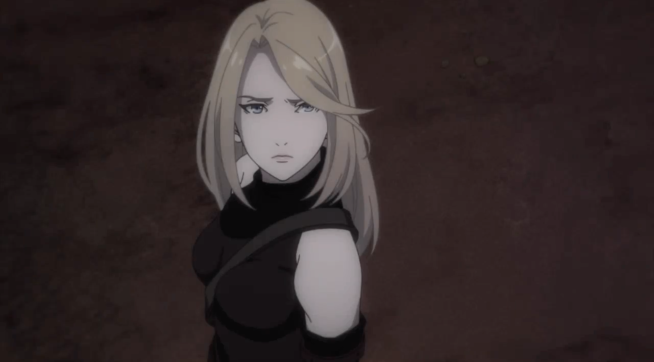 I’m just going to have to accept the fact that P.A. Works doesn’t know the definition of ‘follow through’, now do I?  Like all P.A. Works shows, I was very, very, very, very, very, VERY skeptical on how Fairy Gone was gonna do.  The company only does original shows, and while the onset looked interesting, I was almost positive at the time of seeing this advertised that this was going to crash and burn somehow; I just didn’t know how.

Well, apparently it’s by following in the steps of Angel Beats and Charlotte by making the narrative so absurdly complex through dumping in every idea you could think of for the plot and saying ‘no’ to none of them.  I’m honestly just tired having to write and say the same fucking thing for every P.A. Works, but they keep fucking doing it!  Now I don’t hate Fairy Gone.  In fact, I actually find the show to be very interesting because of how many facets of this narrative they managed to cram in here.  But because all of them are half-assed in the way they are, I find it very hard to give the show any other positive qualities aside from maybe neat designs for the soldiers’ fairies.  It’s just…disheartening, really disheartening to see the same cycle get repeated season after season, year after year. 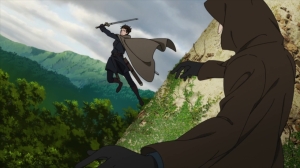 So ultimately I do not recommend this series.  I’m still watching the second season just to know how it ends (and I’ve signed a blood oath to watch everything P.A. makes henceforth), but I think for the casual/typical watcher, you’re better off finding something else to watch.  A damn shame too cause a part of me was really looking forward to having something from this company to recommend to people aside from the usual three to four shows I found to be at least of decent quality.