Romance in anime is a laborious task. The standard plotline for romance anime is to make the ending of the entire series the confession where the two main characters get together with the entire runtime being a slog up to that point with the majority of it being the classic will they/won’t they push/pull action that gets cumbersome and tiring after it has been done over and over again. So, does Masamune-kun’s Revenge break that mold? If I’m being honest here…kind of?

Makabe Masamune was a very chubby fat kid when he was young. During his youth, he made friends with a rich girl named Adagaki Aki where a friendship between the two sparked. But one day, after being bullied repeatedly, Masamune asks Aki to defend him and help him out of his predicament, only to be spat on and thrown away like a piece of garbage. Now in high school with a body shaven down to that of a male model, Masamune returns with sworn vengeance against Aki. His plan: Make her fall in love with him. Then dump her! MUAHAHAHA!!!

As ridiculous as the plot sounds, Masamune-kun’s revenge is an interesting twist on the romance formula. Though watching it has a lot of moments that will have predictable results, the plotline follows the classic revenge plot that’s not too terribly commonly seen in the romance genre. Each episode follows Masamune’s progress to try and raise Aki’s flags and try to achieve the end goal of dumping her to make her feel the pain that he felt many years ago. For this, I have to commend the series for trying something that feels new, and it doesn’t part from the series’s runtime at any point in the show. While yes it’s not completely immersed in the revenge plot, as many common highschool anime tropes like the school festival, beach episode, etc, are used as the backdrops for many of its episodes, they at least feel different enough to not just feature them just for the sake of having them. (Though your mileage may vary on some of those tropes.)

Additionally, the plot features several ‘wrenches’ in Masamune’s plan in the form on new characters that get introduced in the middle and last areas of the series. These characters help make up the majority of the later arcs of the series and help serve as catalysts to further Masamune’s revenge plot. The quality of these characters vary however, as some of them work while others could’ve been handled better. 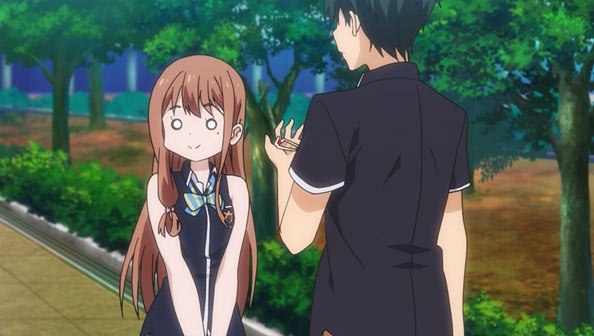 The downside to the whole series however comes in the form of the series’s ending and its overall pacing. This adaptation covers roughly 30 chapters of the original manga, and succeeds only by squeezing in all of that content in 12 episodes, thus cutting out a lot of seemingly unnecessary scenes. As someone who reads the manga, the story still holds up, but the last arc that they decided to do for this adaptation could’ve been handled better, as the last three episodes that were used for that arc rushed through the content and created some disparity in the urgency of the situation. Not only that, but the anime ends on a ‘read the manga’ ending, where they tease the next arc in the last few scenes of the anime before ending it off. To anyone who doesn’t read the original series, this leaves a bad taste in anyone’s mouth, and it honestly bugged me cause I feel like they could’ve handled it a little better.

Overview:
+ The revenge plot stays consistent
+ Doesn’t feel too too generic
– Uneven pacing at the end
– Read the manga ending

While I do praise the story for having some form of originality with how it plays out anime highschool scenes, characters, particularly one, have some faults that I really want to point out.

First, the easy stuff. Makabe Masamune. Having an extremely vain personality to the point that he has on occasion spent time looking at himself in the mirror, Masamune is our MC hellbent on making Aki pay for her past transgressions. While seemingly one-note, Masamune progresses through the series trying to make heads or tails about what his true intentions are with trying to make Aki confess to him. I feel like there’s genuine growth with him as the series progresses, and the whole thought of trying to make his revenge happen feels like it persists, but changes in how he does it the longer the series goes on. Personally, I quite like Masamune. While he might not be the most original character, there’s something about him that feels worthwhile to watch. And that’s honestly something that I don’t find a lot of in most MCs. Especially those in romance anime.

Then there’s Kowai Yoshino, the large-breasted (cause we always need one of these kinds of girls) stone-faced girl who’s the personal attendant of Adagaki Aki. Largely playing a supporting role in the series, Yoshino acts as Masamune’s ally in helping him with his revenge against her mistress and spends the majority of the series working from behind the scenes and aiding our main character whenever he needs a little help to get things working. She’s a seemingly clueless girl with a silver tongue and while not important beyond being a mentor for Masamune on how to deal with Aki and/or pulling strings behind the scenes, Yoshino does play a big role in the series even if it doesn’t seem like it.

And…last but not least…Adagaki Aki… Being honest here, I don’t like this girl. Aki is what you would come to expect when it comes to a main rich love interest in a romance series. A spoiled tsundere brat who lengthens the series more by being stubborn and hardheaded while both never being true to your feelings and being a bitch in the process. No matter how many times the series tries to make her seem cute by making her clueless to the world or inhaling unholy amounts of food into that frail-looking body of hers, Aki exists as Masamune’s struggle to fulfill his plan. Sure we may understand a little bit more about her as time goes on, but the first impression and the trope she represents is god fucking awful, and I didn’t realize how much I didn’t like her until I watched the adaptation. I didn’t like her while reading the manga, but the anime told me again and intensified why I didn’t like her in the first place.

Other characters fall into one of two categories. Side characters like Koujuuro and Futaba are those that persist throughout the series and are basically dragged along to the romance drama that goes on in the series, and ones like Neko are characters who have the arc wrapped around them with changes to Masamune in particular packaged along with them. Neko in particular is the more interesting one of the lot, as she has a large portion of the middle of the series dedicated to her arc, which is a section of the story that was given the attention it deserved, and for that I’m grateful.

Overview:
+ Most of the MCs don’t feel too trope-ish
+ Most side characters have a great real of relevance, screentime, and impact
– Aki’s a bitch

Silver Link’s bad habit of taking on multiple shows in a single season has reared its ugly head on more than one occasion. Winter 2017 has them take on two shows, and Masamune is one of those two. So how does it fair? To be honest, not bad. 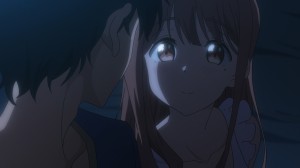 Masamune-kun’s art is largely what I would say is standard fare for the company. The colors are light, the art has little to no flaws with the quality of the drawings, and everything looks pretty good. Admittedly there’re no dramatic action scenes or anything that require hundreds of frames in order to animate correctly, so that would help save time and money, I suppose.

Admittedly, the soundtrack is not really all that’s cracked up to be. It’s not a bad OP or ED to listen to, and there were a few times where I didn’t feel like skipping them, but they’re just…not worth remembering. Which for me, is a bit of a disappointment, as we have “Elemental World” by ChouCho as the ED, which was a bit of a lackluster track to listen to considering the artist has stuff like Prillya’s 4th season OP and Heaven’s Memopad’s OP under her belt as previous works. It just doesn’t stack up, so I’m not too bothered wth the sound.

I honestly like this series. As someone who has the majority of their lists consist of romance stuff, Masamune-kun separates itself from the pack by being a more interesting version of your slow-paced romance. Sure, it’s expected that the two MC’s will get together, but at the very least, the journey that they’re taking to reach that point has some form of variety.

I did. Particularly Neko. I love Neko. She’s a fun character that adds quite a bit of impact in the middle portion of the series. Which ends up becoming naught because best girl never wins anything, now do they?

Aside from the clear and obvious one of our main ‘heroine’ (if you can even call her that), the whole last arc didn’t sit right with me. It felt too fast-paced and I was disappointed with the execution. Also with what happened to Neko. I don’t think a lot of people were happy with what happened to Neko. Did I mention that I’m a fan of Neko? Neko. (Insert more “Neko’s” here.)

Would I recommend this anime?

If you’re looking for a different kind of romance anime that doesn’t stray too far from the norm, Masamune-kun’s revenge is probably your best bet. It tries to do something different from the generic romance anime formula and manages to pull it off fairly well. The ending is a bit annoying, Aki’s insufferable, and best girl doesn’t win, but it still has some entertainment value nonetheless.