Ore no nounai sentakushi ga, Gakuen Love Comedy wo Zenryoku de Jama Shiteiru, or simply, Noucome. If you were able to say that whole damn title in one breath, then congrats, you win nothing. Life is a series of choices. In it, there are good choices that lead down good paths, and bad choices which lead to not so desirable paths. Noucome…is filled with a bunch of bad, yet hilarious choices.

(That is, if you choose to read the rest. That’s on you. I’m just writing this for fun.)
Story: 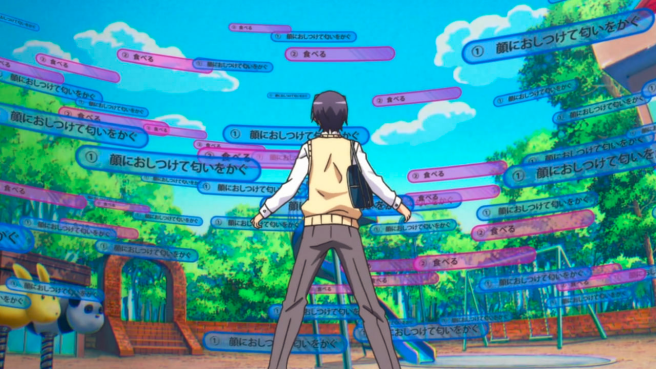 The anime itself is just as ridiculous as its title. The story follows a boy named Kanade Amakusa, who suffers from Absolute choice, meaning that his life is basically a gigantic visual novel where the choices that he makes leads him to strange and awkward routes. Until one day, where a blond girl falls from the sky from one of his choices, leading him to begin his journey of ridiculous quests to get rid of his choice syndrome. With all the visual novel nonsense and random girls falling from the sky, this story is really…absurd. Seriously. It has pretty good pacing, and is able to “conduct” its messed-up storyline well in terms of speed and transitions. Speaking of its storyline, this is without a doubt very random. Next to FLCL, it can be considered to have one of the most random storylines out there. Oddly enough though, this anime works very well with its randomness, being able to funnel all of that into something that is in fact, a great comedy series. Speaking of comedy, it’s all random. I’m not kidding, all of the comedy is pretty much random moments that everyone enjoys. Especially since the comedy is all pretty original. 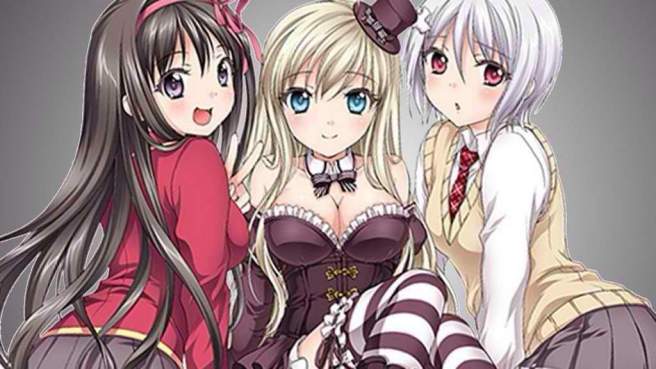 When you look at the characters, you’ll see basically any anime archtype or character class you have seen in the past. Meaning, you’ll see things like the rich girl, the genki girl, the little sister, the glutton, all that sort of crap.  While yes, they are all literally copies of existing character troupes, the characters take their character type and skyrocket their potential to hilarious proportions by going overboard with their personalities. (Ex: Little sister character wants to be EVERYONE’s little sister.) It’s this kind of thing that makes this anime so great. They basically ridicule the anime tropes through their characters in a way that makes it just so frikin’ fantastic and hilarious to watch. Although I’m a little disappointed with the lack of main male characters aside from Kanade who is denser then a block of lead, it was still funny to see all of the female characters in all their archtype glory. The side characters are just completely pointless, yet still funny. They add their own stamp on the anime with the added conclusion of throwing them all in your face by the very end just for the hell of it.

The art in this anime was done by Diomedia, which in turn, created a wonderfully colorful and bright look for this piece of absurdity. The characters are all VERY detailed and very colorful.

It was to the point that they tried to showcase JUST how good the art was by doing screen scrollers of just the characters eyes to show off the detail. The sound in this anime was just as good, in my opinion. The OP has got to be, one of the most hyper and energetic sounding openings ever. It’s just so happy sounding and absurd, that it fits in so well with the anime!

The ED was also very good in my opinion, as it featured a hyper and energetic tune that was leaning towards the electric guitar compared to the OP leaning towards the drums, due to the crap ton of guitar riffs. (By the way, regardless, you will hear both of these tunes one way or another. The creators sneak them in.) Personally, I love the soundtrack with all of its glory.

It really shouldn’t be a surprise with all the praise that I’ve been giving this show, that it’s one of my favorite animes of all time. It’s just so fun to watch. Bear in mind, this isn’t a masterpiece in any way, nor will it ever be, but it’s just one of those series’ that you can just sit down and enjoy without really thinking. (seriously, don’t think when you’re watching this.) The anime is completely absurd in every sense of the word, and that’s what makes it so great. The characters are a breath of fresh air with their own twists to the story, as well as the “dramatic scenes” between characters that deepens the story ever so slightly. With 2-3 potential episode names/episode, as well as little “opposite choices” at the end of almost every episode (I’m just telling you this so you don’t miss it, should you choose to watch it), the anime is nearly unpredictable and takes drastic turns at every possible moment. With the added mechanic of absolute choice giving random and hilarious suggestions most of the time, the anime can literally turn into any situation, period. In the end, Noucome (I’m not writing that  title again), is a wonderfully hilarious series that can make someone forget their troubles, and is just fun to watch if your looking for mindless entertainment.

So, faithful reader. If you made it to the end, I will give you a few choices. (Choose one or more)

Good day to you all.