Seitokai no Ichizon is a parody anime, so, therefore, it would make a lot of sense for me to try to fit in as many references as I can because, why not?

The story of Seitokai no Ichizon revolves around 5 people who exist in a school that determine their student council via a popularity contest. Because of that, they are usually good-looking girls. The fifth member is always the person who scores highest on a midterm. And so, with 4 girls and a guy, what’s going to ensue? HAREM! or not. With this in mind, the plot of this anime doesn’t really go anywhere. In fact, it goes nowhere. But, for an anime that purely focuses on its characters and comedy, plot really has no need to exist, so yeah. 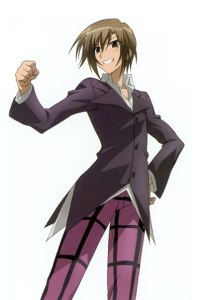 For the main characters, we have, as I have stated before, 4 girls and a guy. Ken Sugisaki as literally the only guy in this anime is well, a pervert. Constantly playing h-games and trying to set “flags” on the girls, his only goal in this anime is to not date one of said girls, but to create his own “harem ending”.  Basically he wants every girl to love him, without actually dating them. This goal came along with the motivation to actually get into the student council and meet said girls. However, this character has a more, softer side to him. After they finish pissing about in an episode, he always accomplishes the work that they were supposed to do together, by himself. Showing that he in fact wants the girls to be happy.

Next, Kurimu Sakurano. As the lolita of the series, she is the oldest of the group, being a third year in high school. As the student council president, she makes sure everyone is doing their job and no one is slacking of-hahahaha! I can’t go through with it. Being the smallest and most child-like of the group, she basically acts like a 7-year old. To summarize her briefly, she has a sweet tooth, she’s child-like, she’s horrible at school, and she’s self conscious about her body. Not really much else to say.

Next, Chizuru. As the most “sadistic” one of the group, she bears resemblance to Mikako from Sora no Otoshimono, as they are both insane! Thinking about world domination and possessing Kurimu as a servant, she truly is the most “evil” one out of the bunch. It should also be noteworthy that she has a Death Note with her.

Next, Minatsu. To put it short, Sports, fighting manga, aggressive attitude. As the tomboy of the group, she has is basically who she is. Not too many characteristics with her. And finally, Minatsu’s sister, Mafuyu. As the youngest member of the student council, she possesses incredible game knowledge and doesn’t really possess much of a personality other then being shy talking to guys. As a master of games as she is, she constantly works on blogs for game strategies and love yaoi. Yes, yaoi. All these characters are very one-sided with very little character growth. The side characters really have no purpose other then pose a problem or move the story along.

The character designs in this anime a incredibly well done due to how fine detailed they are. Because the school outfits have ruffles in them, it’s very plain to see how precise the creators are when it comes to designing them. As for sound, well, it’s definitely good to listen to, but not really anything to get stuck in your head. The OP has a sort of somber feel to it which is very off putting because of how energetic this show actually is. It doesn’t really fit. The ending however has a comedic chibi art style and is quite energetic, though not as much as it could be. In short, the soundtrack sounds good, but not as memorable as it can be.

As a harem fan, I was pleasantly surprised on how this show would turn out. In fact, it surpassed my initial expectations with the idea of a harem only being in one person’s head, which is actually pretty funny. The comedy in this is slapstick to a certain degree, with Japanese humor which sometimes, people don’t get. It’s always funny to see the lead male get mistreated to the point of actually feeling sorry for him for suffering the abuse he gets from the girls, i.e. getting thrown into a cramped locker so the he wouldn’t see the girls in swimsuits. They sometimes break the fourth wall which is usually pretty entertaining. (The fact that they have an anime in the first place, and trying to change their characters via a sentence ending.)

While this show has many references that entitle it to being a parody anime, it sort of loses its touch with the amount of references it shows. Sure, there’re a bunch in the first few episodes, with its first “opening” in the first episode being lucky star, but to me, there should’ve been more references/episode. Another turn off for me was the addition of plot. As a comedy anime, there shouldn’t be any plot whatsoever. But the thing is, the anime tries to take itself seriously for 2-3 episodes and make it seem like an actual story. To me, a comedy should just be pure mindless humor, and the addition of trying to make a plot just made it lose its touch. But nonetheless, it is interesting to delve into the minds of these characters and see if there were any ties, which there are, but it doesn’t really all come together as nicely as it could’ve. In any case, Seitokai no Ichizon is a hilarious little short anime that almost lives up to the parody name, and I would suggest to watch it if you want to just kill time.