I watched this, on account of someone telling me to watch this after they showed me the ending. Of course, I’m sure many people would’ve done the same thing, which is wanting to know what events occurred to make such a train wreck happen. Now, I wish to punch that guy in the face for wasting my time! But enough of that, onto the review.

The story of “School days” revolves around our main protagonist Makoto. In love with a girl named Kotonoha, he wants nothing more then to begin dating her, even going to the extent of using a picture of her as a charm as his cellphone wallpaper. It isn’t until a girl by the name of Sekai comes into the picture and decides to help him, which in the end, creates a love triangle. 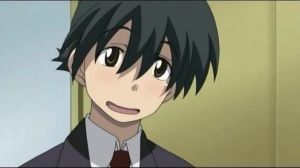 Pff…again, where do I begin? Makoto, as the main protagonist, all he wants is love. As the main premise for the story, he begins falling for Kotonoha, then switches to another girl, which, is normal for guys his age as crushes do come on and off. However, what makes this guy really special, is that he is in fact, a complete ass. Without breaking off a relationship,

this guy cheats over, and over, and over, and over, and over, and etc. You get my point. This guy really has no personality whatsoever. In fact, he shows nothing in terms of personality other then being a complete player. Next, Kotonoha, or should I say, the fanservice in this anime. A quiet and shy girl, she becomes romantically interested in Makoto and begins stepping out of her shy bubble and tries to be braver. In the end, well, she’s a yandere. Finally, we have Sekai, the over spunky girl of the series. Though personally, I like her as she has a smidge more personality then the rest of the girls, she’s not really any different as her thoughts turn to murder as well, oh boy. Then we have the other 5-6 girls and one other guy which play an extremely minimal role to that point that I will not mention them any further.

The soundtrack is nothing too good as no matter how many times you listen to it, you really won’t catch it in your head. It’s really generic and not too noteworthy. The art on the other hand, is rather good. The animation is very fluid and concise, and the characters themselves have really well done designs. Probably my most favorite part of this show.

WARNING: Rant ahead.  I hate School Days. To me, it’s horrible and a disaster beyond belief. Personally, I want the 4.5 hours I spent watching this back. I really can’t say anything good about this other then the art. While yes, there were “good” points in the story, it really went downhill really fast. First of all, Makoto himself. There were many a time in this anime where the romance problems could’ve been solved rather easily. First of all, break up with your current girlfriend! IF that happened, this anime would’ve not had to end as it should’ve as its ending is very well known. Second, I doubt anyone has this sort of problem at school, so it should be renamed to “Life of a high school player” or something. And finally, idiotic choices. Of course, if common sense was put into this anime, then it wouldn’t be so debated as it really is. However, I can’t help but note that there are many idiotic choices made by the characters themselves that puts them to blame at how this turned out. I-I-I can’t say anymore. Just a warning, watch at your own risk and try not to punch your computer screen in anger. If you have a different opinion, I’d be glad to hear it.